During the upcoming AES convention in New York 2017, their will be one special and probably very great new audio effect processor be showen – the Eventide H9000.

News from the Lab: H9000 Part 1
Hello! My name is Jack Impink. I am an electronic musician by trade, working with both gear and software. I like to use older equipment alongside programs like Max/MSP to see what kind of odd sounds will be produced. I’ve been working in the Eventide Labs beta testing the H9000, and I can’t wait to show you what I’ve been finding so far.

First and foremost, the big news: Eventide will be unveiling the H9000 at the 143rd AES Convention on October 18th, 2017! You may have seen some footage of the unit from a certain promotional video already, but in this blog we’ll be going a little deeper. Tune in to see what features we’re working on and any hidden gems that I discover along the way.

Let me begin by saying: I love simple interfaces. I’ve used gear and software before that requires me to pore over the entire manual at least twice before I can even get sound out of it. One would think upon hearing about the extent of the H9000’s abilities (e.g. FX chains, network audio, remote app) that it would be a menu-diving nightmare to get it to spit out a hall reverb, but I managed to get it up and running with full functionality in a mere twenty minutes without the use of a manual. How? The entire interface is laid out right in front of your eyes. I was able to fly through the menus by using the main buttons (Parameters, Algorithms, etc.) in conjunction with the unlabeled side menu buttons that correspond to each menu shift.

2017 presets, to be exact. There’s nothing wrong with just picking something and going with it, however. It’s hard to mess things up when there are so many presets in the factory memory to choose from. Some of these presets are holdouts from the H8000, DSP4000, and H3000, and some are hot off the press from the H9 Harmonizer®. 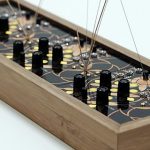