Some days ago, Softube has published a video in which Andreas Tilliander talks about Softube Modular and workflow in the studio.

Swedish Grammy awarded artist and producer Andreas Tilliander is one of the pioneers of modern day electronica. His first releases Cliphop and Ljud contributed significantly to the clicks & cuts genre, and he has since released a number of albums under different monikers—such as Lowfour, Mokira, Rechord and most recently TM404, which he also mentions in the video.

We stopped by Andreas’ studio for a session and a chat about Softube Modular, Eurorack and his studio workflow.

As a Modular owner, the basic system gives you a great toolkit to start out with. It includes six modeled Doepfer modules and over 20 utility modules. But there is much more to discover. Additional modules from quality Eurorack vendors—starting with a range of units from cutting-edge manufacturer Intellijel—are available for separate purchase. More modules will continuously be made available. Owners of Softube’s drum synth Heartbeat can add its instrument and EQ modules to Modular and combine them with any other modules. Softube’s award-winning engineering team have modeled each analog module, component by component, and the resulting plug-ins are sonically indistinguishable from their hardware counterparts.

Experienced Eurorack synth users will be right at home from the start. Modular’s workflow is very close to the use of physical Eurorack modular synths. Add modules, connect them using virtual patch cords, adjust their knobs and switches to your heart’s desire. Get MIDI connectivity with the MIDI To CV/Gate Converter and add any of the included step sequencers—unless you prefer using your DAW’s built-in sequencer, of course.

To beginners, a modular synthesizer can be daunting at first. But Modular offers a wide range of expertly designed presets, immediately available to be put to use in your music. When you are ready to learn more about patching a Eurorack synth, the manual offers step by step patching tutorials that go hand in hand with the included tutorial presets. 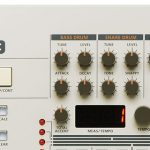